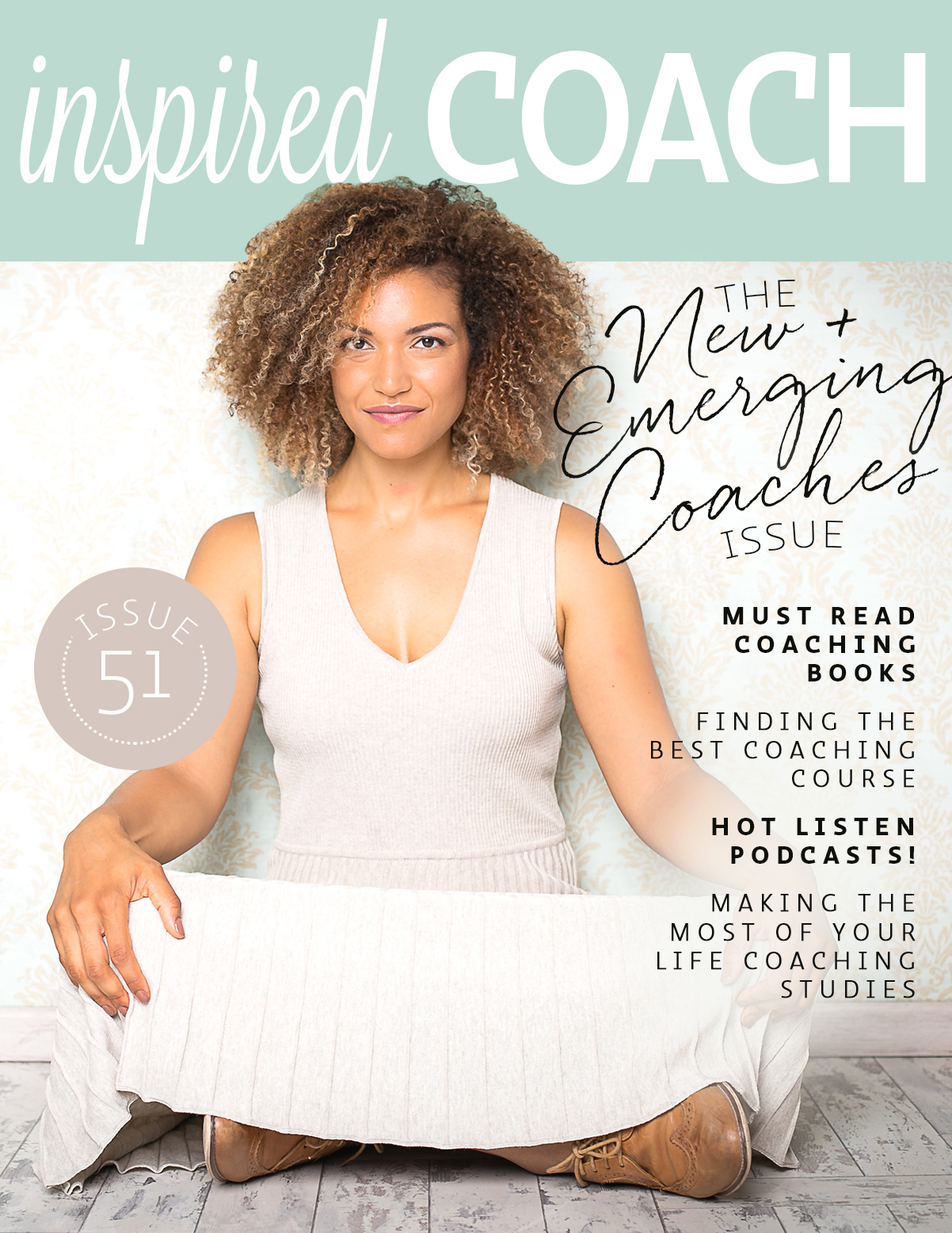 If you’re anything like me, you love a good about page.  I mean, if you’re thinking about working with someone you just met online, it’s only natural that you want to know a little bit more.  Am I right?

My official bio is at the end of the page, but if you’re curious about who I really am (beyond all of my degrees, certifications and that shiny magazine cover to my left), grab a cuppa and take your time.

I was born with a club foot.  Two club feet, actually, but the right one corrected itself.

Funny how the thing I was most ashamed of as a child is the first thing I’m letting you know about now (Ha!).  If you don’t know what a club foot is, Google it up!

Suffice it to say, I couldn’t walk normally until I was twelve years old. That’s when I had my fourth and final major surgery that involved a complete restructuring of the bones of my left foot.

While I get around without a problem today, you’ll never see me in a pair of high heels.  Red high tops on the other hand . . .

Growing up, whenever I would go anywhere with my mom, she would always introduce us like this: I’m Linda Jo, and she’s Jolinda.”  A lot of people assume that the Jo has something to do with my dad, but his name’s Robert so there goes that theory.

I do, however, have his middle name.  Jolinda Krozett Johnson.

I guess they knew when I was born that I’d be a one-of-a-kind. 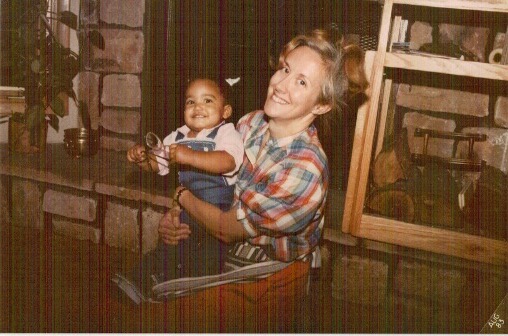 When I was a girl, there was one question everyone wanted to know the answer to: What are you?

Having a white mother and a Black father, growing up in Detroit in the 1980s, people were a little obssessed with how I identified myself.

According to my mother, I was “tan” which didn’t seem to be an acceptable answer to anyone but her.  Since the term “biracial” hadn’t really come on the scene, I was referred to as “mixed,” “mutt,” and by the exceptionally ignorant and confused, “Mexican.”

Now that I live in Spain, my race doesn’t define me as much as my nationality.  To everybody here I’m simply American, and that has been a relief.

Once upon a time, everyone thought I’d be a lawyer.

With an Ivy League degree in History, having specialized in Arabic and Middle Eastern Studies, you’d think I’d be an international lawyer or a diplomat by now.  And, truth be told, when I graduated from Columbia University back in 2004, I thought that would be my path too.

After earning my Master’s of Science in Education while teaching full-time in a middle school in New York City (in what was supposed to be my break before law school) I decided to stay in the classroom for another ten years.  I loved my time as a teacher, but I always knew there was something more in store.

Being a Wellness Mentor and Priestess is that “something more.”  I had to take a few detours to get here, but at least I know now that I’m on the right path. 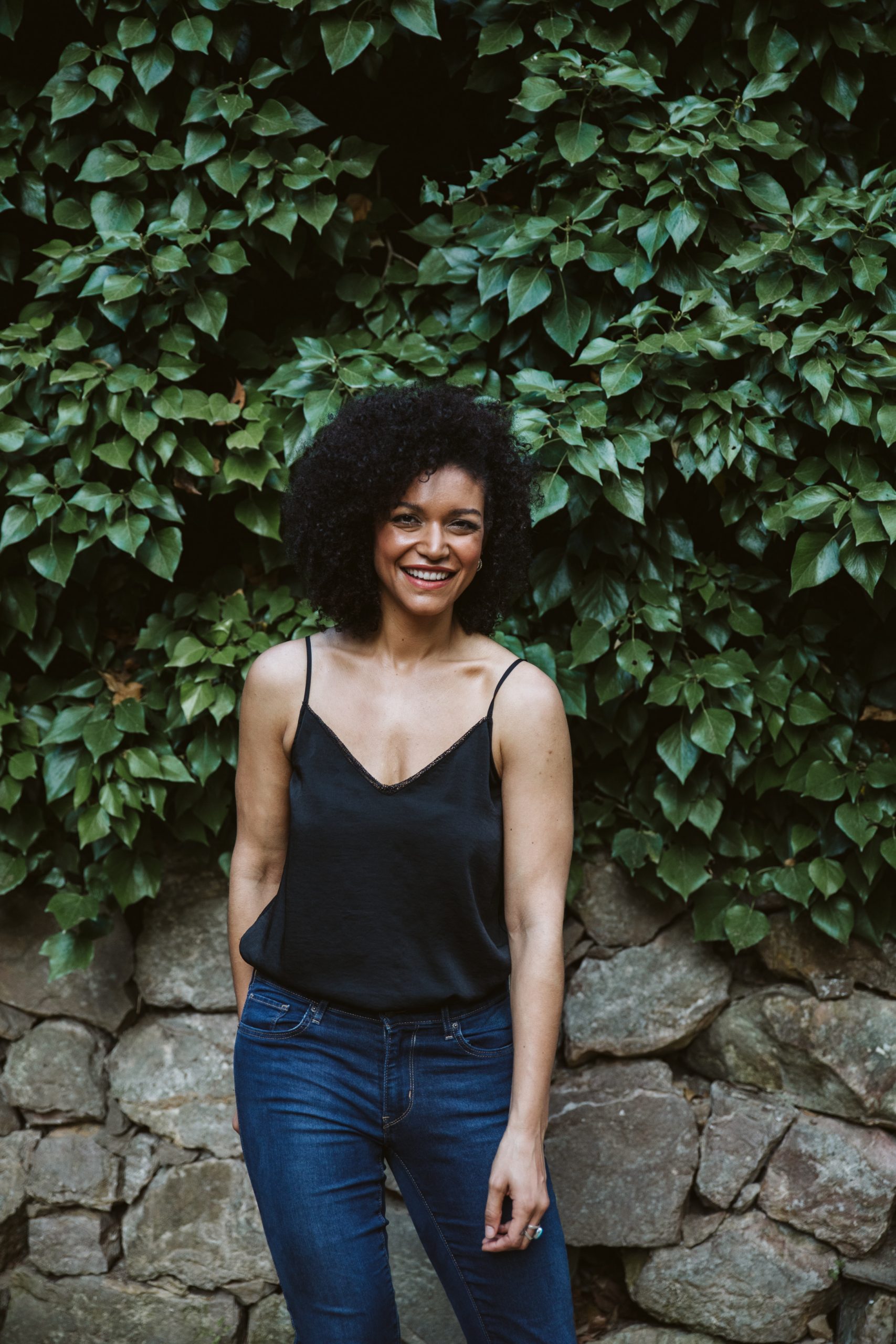 I have an invisible disease that mostly affects white men in their 40s.  WTF?

In the summer of 2011, I went to bed with a sore neck and the next morning discovered that I couldn’t move it—at all.  The first doctor I saw put me in a neck brace and told me to read romance novels to relax.  After months of not being taken seriously and trying everything from physical therapy to acupuncture, I was finally put in touch with a rheumatologist who was willing to run the tests I needed and confirm the diagnosis I had suspected all along.

Ankylosing Spondylitis (AS) is basically like spinal arthritis and can lay dormant years before the first real flare.  Once you’ve got it, you’ve got it for life, but you can manage the symptoms through diet, exercise, and by avoiding doctors who don’t believe your symptoms are real.

I had never been to Spain when I decided to move here eleven years ago.

When I first arrived in the fall of 2008, I had never even visited.  I only knew that I wanted to live in Europe and become fluent in Spanish (so it seemed liked the logical choice).  I signed up to be a Language and Culture Assistant through the Council on International Education Exchange and went from the bustling streets of New York City to a sleepy town in Jaén.  Culture shock, anyone?

After finishing the school year, I was offered a job teaching here in Barcelona and the capital of Catalonia has been my home ever since. 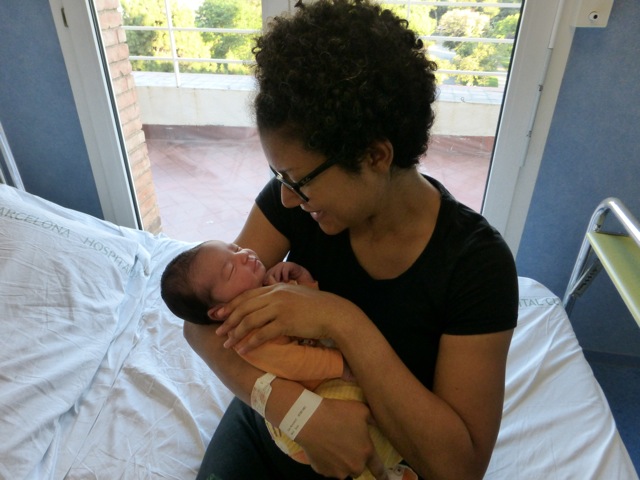 Everything changed for me when I became a mother.

When Leonard was born, I thought I had it all figured out—husband, job, baby.  The only problem was, in checking off all the boxes, I had totally lost touch with myself.  Despite being married to a man who tried to convince me otherwise, I realized that I really was capable and intelligent and strong.  Nothing like having to take care of a baby on your own in a foreign country to get you in touch with your inner badass.

I never wanted to get divorced or to be a single mother.  But sometimes you have to give up the life your past self wanted and embrace the one your current self needs.

Some stories only my tattoos can tell . . .

My first tattoo is the queen of hearts, which I got as a couple’s tattoo with my partner in Wales.  We had only known each other for a few weeks, but I figured if the relationship ended I would always love (and lead) with an open heart no matter what.

The second tattoo is on my left index finger and it’s a glyph that means “transformation”.  That finger is also associated with personal confidence and self-trust which has been key to my own transformation in the last few years.

The third tattoo is just above my right wrist.  It’s an ancient symbol called the vesica piscis and represents two parts coming together to create something new, while still remaining whole within themselves.  It’s my personal reminder to never look for my missing half in a relationship, because no matter what I am complete on my own. 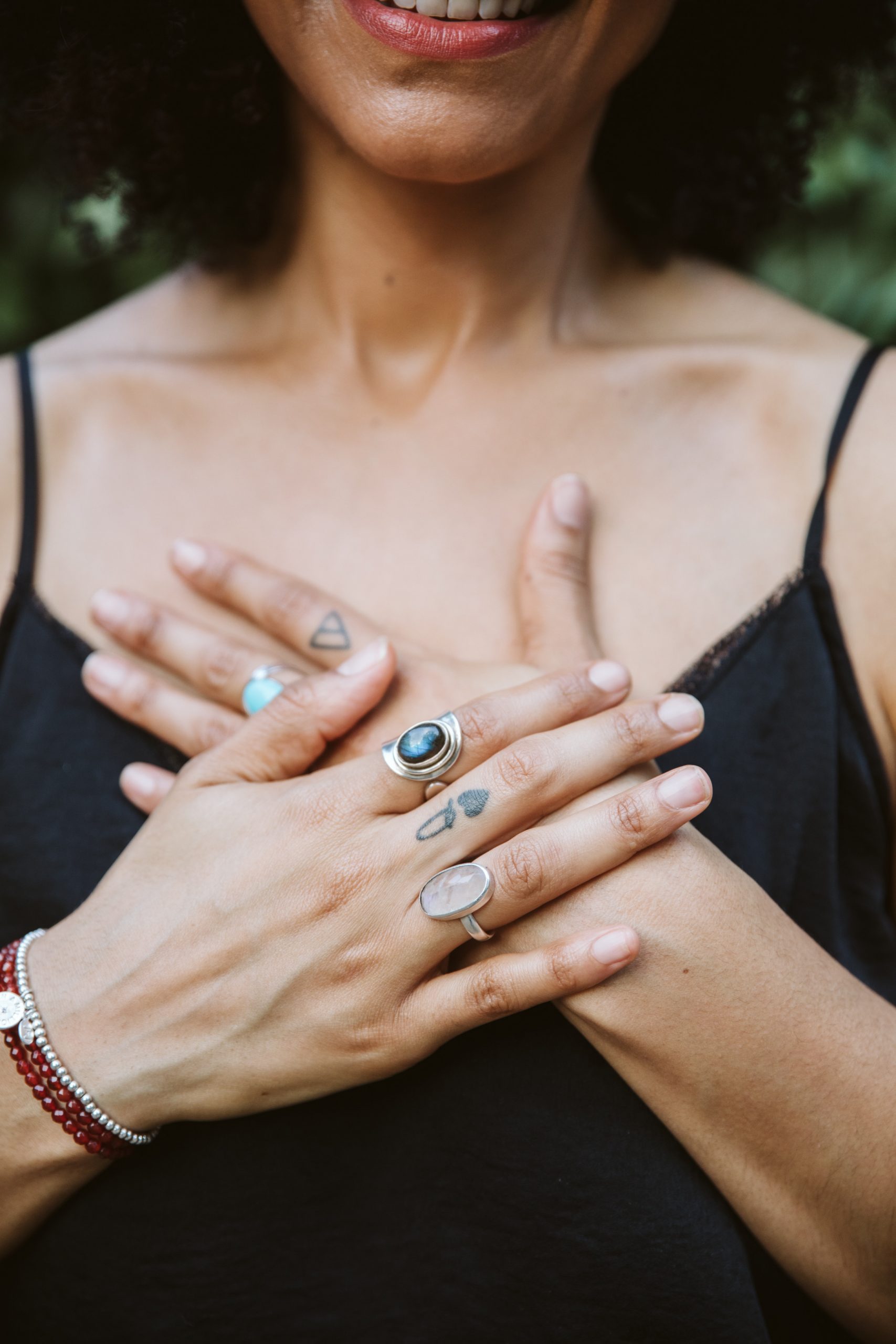 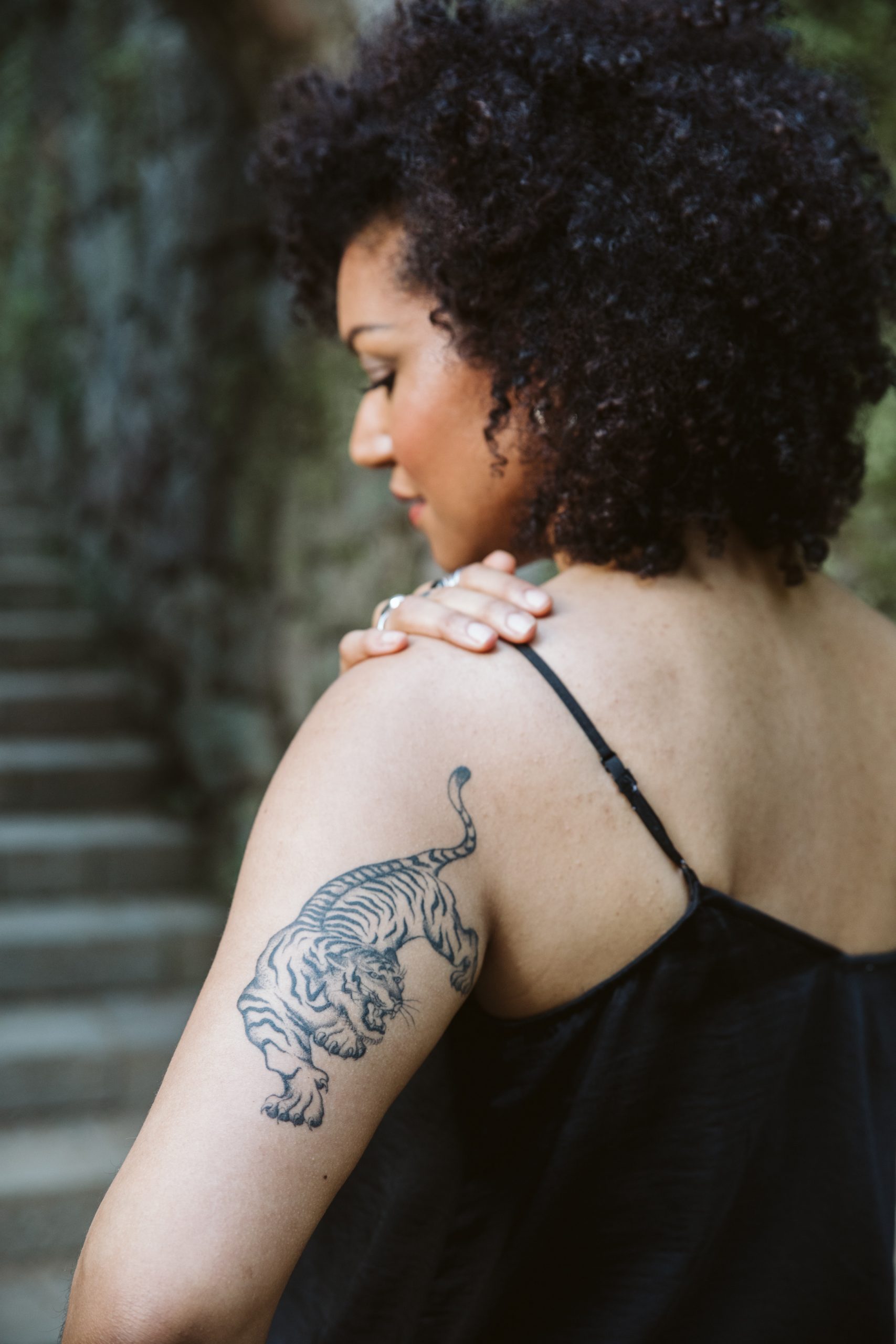 The fourth is a tiger on the back of my left arm.  Tigers are known for their strong will and determination, their ability to travel long distances while conserving their energy for the hunt, and of course their fierceness when it comes to going after what they want.  Tiger mothers also raise their cubs entirely on their own, making me a tiger mom indeed.

The fifth is the cross of Camargue.  I first learned about this symbol from the book How to Love Yourself (and Sometimes Other People) by Meggan Watterson and Lodro Rinzler.  It’s a cross with an anchor at the bottom and a heart at the center representing, faith, hope, and love.  And yes, the greatest is love.

The sixth is a lotus flower and a semicolon on the back of my neck.  The lotus flower is a symbol of spiritual awakening as well as regeneration and rebirth.  Even out of the murkiest waters, it manages to bloom.  The semicolon marks where the author could have ended a sentence but chose to continue.  This tattoo is for all of us who keep going, keep fighting, and keep blooming no matter how many times we’ve wanted to give up. 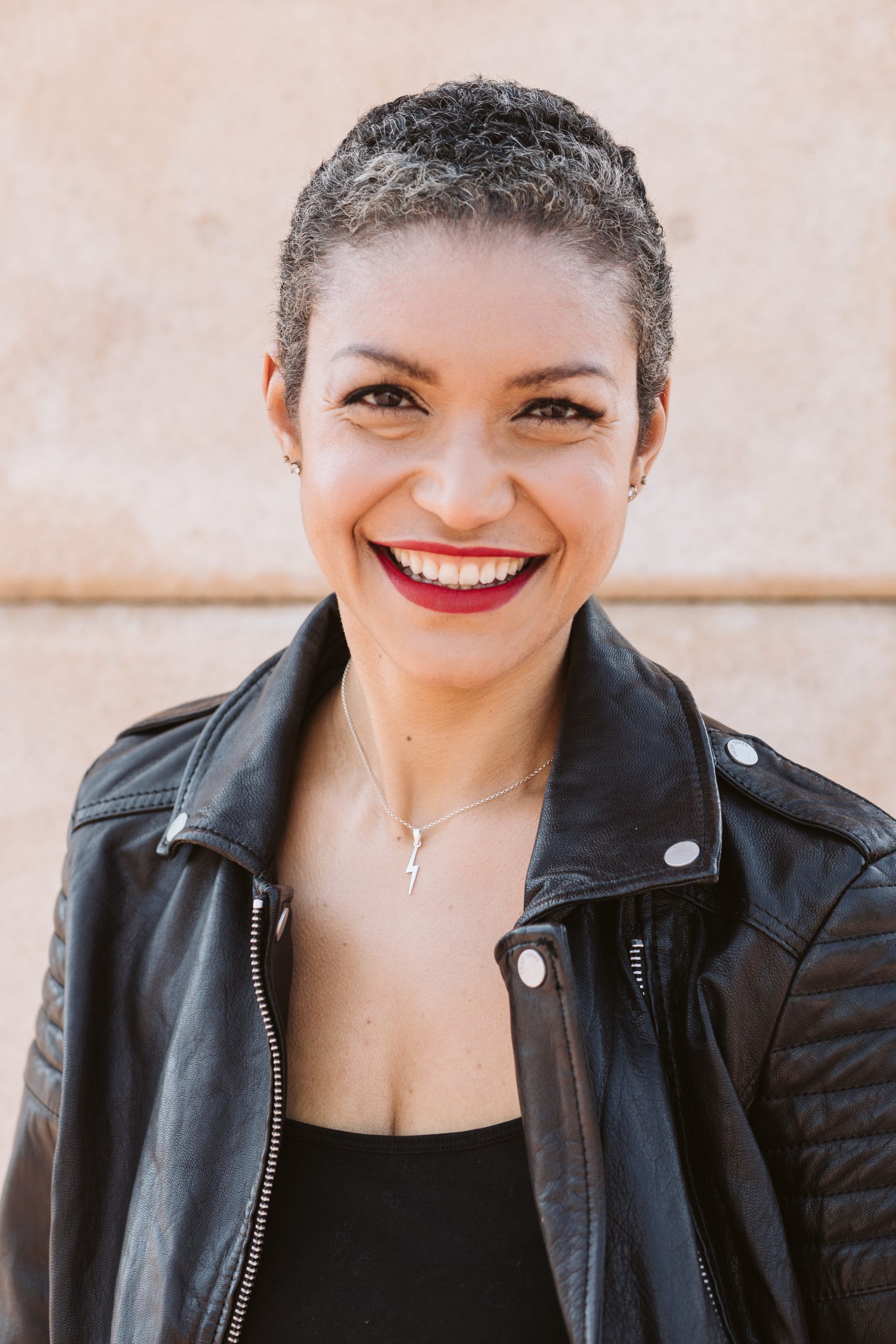 Jolinda Johnson is an award-winning Wellness Mentor (M.S.Ed., CHHC) and Priestess for feminists, BIPOC, and LGTBQIA+ folx at the intersection of burnout and perimenopause.

She believes you can’t change the current system when you’re exhausted from fighting against your own body.  Through a hybrid of holistic health and life coaching, paired with scientific education, she reveals what needs to be healed so you can restore your mind-body connection and ride the waves of your changing hormones with greater ease.

She’s originally from Detroit, Michigan but has lived in Barcelona, Spain for the last twelve years. Once upon a time she was married, but is now a single mom to a six-year-old son named Leonard (Lay-o-nard) who was sent to teach her how to live in the present and finally go with the flow.

She’s a sought after speaker and guest teacher, has been featured on the cover of Inspired Coach magazine, and was the winner of the Beautiful You Life Coaching Academy CEO Shine Award in 2021 as well as a finalist in 2018.  She’s a Certified Holistic Health Coach with a specialization in hormone health, a Certified Life Coach, and holds degrees from Columbia University and Pace University in the City of New York. 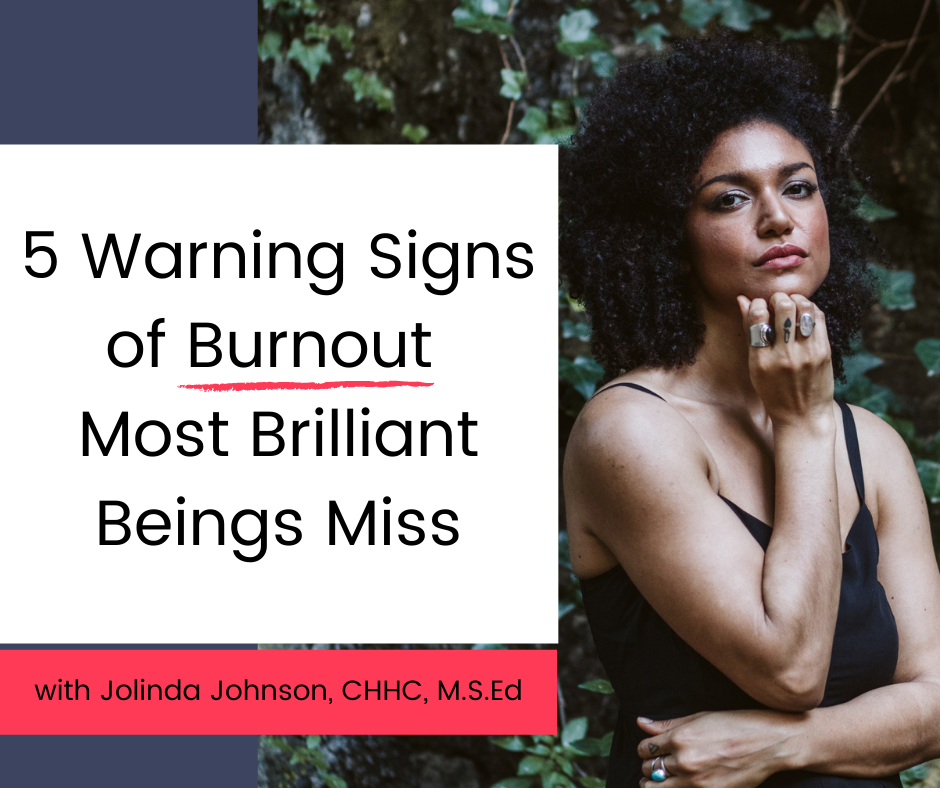 Think stress is your path to success? Then burnout could be your next stop.

Drop your email below and get my FREE 5-part video series to help you recognize the warning signs and overcome the symptoms.